So here’s the second installment of the costuming post. My Latin dress looks like this, and it’s pretty rad: 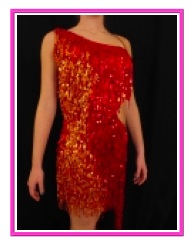 The body of the dress is covered in slung sequin fringe (basically fringes of different length in red and holographic orange made out of sequins). It’s crazy fun to dance in, because the movement is insane, and it makes cool noises. I was dance testing it the other night at the studio and when I was walking back to the teachers’ room to change, one of my co-workers said, “it’s like applause every time you move!” SO TRUE. And who doesn’t want to take their own applause with them?

I bought it used off the interwebs, and it’s been an interesting reclamation project. When it showed up, it was definitely a fixer-upper (and hence cheap, which is why I could afford it!) – there’s a funky sort of nude panel on the left hip that wasn’t fringed, but just left open. I suppose it might look cool on the right person, but it looked weird on me. Clearly it looked weird on the last girl, too, because she had hot-glued these giant orange bird of paradise fake flowers on the hip? It was a very strange choice, and the ass flowers did not enhance anything. The side cutout was also too high in the waist (granny panties height) and the minimal stoning on the dress was cheap plastic shit.

So after I ripped off the ass flowers and most of the cheap-o stones, I sent it to a costume alterations house to be recut (because you have to know how to keep correct tension in the bodysuit as you do it, and you have to be able to sew the right kind of elastic – far beyond my present skill level). But I did the cosmetic alterations myself, including:

I mostly want to talk about #3, since you can save yourself a LOT of money if you know how to make your own ballroom jewelry and accessories. Last time we talked about how to do those fancy rhinestone bracelets you see all over the place; today we’ll talk about how to do armbands.
Like basically every Latin costume ever (and a lot of the smooth ones, too) comes with armbands. They’re super easy to make – exactly the same premise as costume straps, just with wider elastic and stoning.

First, go ahead and sew a long piece of one inch elastic inside a lycra casing that matches your dress. (Don’t know how to do that? Learn here!)
Figure out how much you’ll need and then just add like six inches and do the whole damn thing at once, it saves time. After you’ve got your big giant lycra elastic snake, feel good about yourself for a minute. You did it! Yay for you! 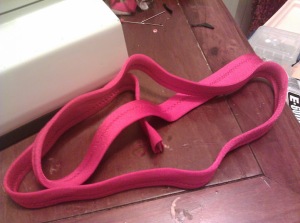 Okay, now GET REAL. This is where there is high potential for you to fuck it all up.

Figure out how many armbands you want – I did three. An upper arm, an elbow, and a wrist (the wrist one being essentially a bracelet that does not move). It is important that you figure out how tight to make them: tight enough so that they stay in place when you dance and don’t move BUT not so tight that they cut into your arm and make it look weird and lumpy. Not even rhinestones will fix that.

The way I did it was to guess as closely as I could, leave an extra inch of elastic or so, cut the piece off from the snake, and then just futzed with it on my arm until it stopped looking weird. This is SCIENCE, people. It is SUPER precise. Even with all the futzing, my elbow one still sometimes slipped. But fortunately this costs you like six bucks so if you totally blow it or you need to make different sized ones later, it’s not the end of the world.

When you have the circumference of your arms figured out properly, pin those bitches and then sew them closed. I decided to sew the upper arm and elbow ones closed completely, but to put a hook-and-eye closure on the wrist one. It doesn’t make any difference – I could have sewn that one shut too. But don’t hook and eye the bigger ones; if you need to make them open and closeable, use velcro. (I’ll probably do that next time anyway, since it gives you more flexibility on the sizing. But I was concerned that my stupid dress would get stuck to the velcro, so. We all make life choices.)

Next step, try not to be a huge idiot and sew your hook and eye on backwards.

Oops, is it too late for that?

Well, I guess you can try just leaving it and hoping.

No? That didn’t work? It flew off your stupid arm every time you extended it? Well, then, dumbass, looks like you better re-do it the right way.

Once you’ve done that, stone the shit out of those armbands. You will lose a little elasticity with the stoning, but not too much. If you’re super concerned, stretch it out as you stone and then release it to dry.

I elected not to stone them solid because I felt like it would be too much and take too long and I would run out of stones and I did NOT want to go back to the fashion district and buy more. So I did mine like this: 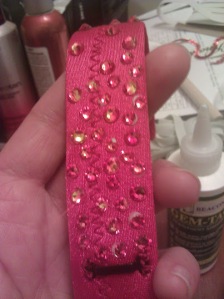 Then, of course, after they were dry I was like, needs more stones! And I went back and glued more on. Which was obviously the right decision.

And that’s it, really! Not tough – the hardest part with these bitches is sizing them correctly so they don’t look stupid.

* NB the ballet hippos from Fantasia are a future post for sure; it turns out there is all SORTS of interesting shit to be said about them.

So you know those nude straps that hold essentially every ballroom costume together? 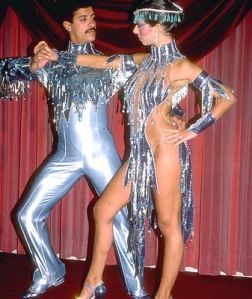 Every ballroom costume made after 1989, that is.

I pulled some pink straps off a smooth dress and was trying to replicate them in nude:

(The bottom one is the original strap from the dress – the top is one of my failed attempts.)

It was 100% trial and error – I knew that basically, you had to wrap 1/2 inch elastic in 4-way stretch lycra and zig-zag stitch it, but that was about the extent of my knowledge. Here, presented for your entertainment, are some do’s and don’t of how  to sew nude costume straps.

So my first idea was to make a sort of sausage casing/pillowcase for the elastic and just slide it in. This is a terrible idea for a couple reasons. Firstly, lyrcra is a slippery bitch, and trying to get it to stay still while you sew it is ridiculous. Secondly, there’s no way it will be tight enough unless you sew it smaller than the 1/2 inch and then you have to shove the elastic through and it does not stretch properly. Plus, the elastic will slide around inside the lyrcra and just generally look like crap. It’s like a bizarre elastic condom. Nobody wants that.

I started off with this 4 way stretch that is actually swimsuit lining (I think) because the color was closer to what I wanted. But it was so soft, it kept tearing at the needle puncture sites when I stretched the elastic. There’s no way it would be tough enough to stand up to ballroom wear. So I ended up going with sparkly nude instead that was a little darker, but much more durable. I also experimented with red – it turns out that it doesn’t matter at all if the grain of the lycra lines up with the elastic, it all stretches great no matter how you slap it together. So that’s nice.

(2) DON’T just assume that because you cut it wide enough, the edges will meet.

I thought, you know, just fold it and kind of push the edges together as you sew and it will work out! Here’s why that turned out to be a stupid idea: LYCRA IS SLIPPERY AS A MOTHERFUCKER. It slides around and the edge you THOUGHT was attached turns out not to be, so the fabric doesn’t actually wrap all the way around the elastic. It will look good from the front, and then you turn it over and swear a whole lot because that turned out to be a total waste of time.

(3) DON’T pull the elastic through the machine.

So I have my mother’s old sewing machine (which incidentally I had NO idea how to thread or do anything with, so thanks internet for helping a sister out) and when I was about ten, she was teaching me how to sew pillowcases and curtains and whatnot. She would always tell me not to pull the fabric through – guide it through from the front of the machine, don’t pull it from the back. And then she would swear like a sailor because she actually hated sewing and it was a pain in her ass and why wouldn’t the motherfucking bobbin sit in the goddamned thing fucking correctly etc etc. 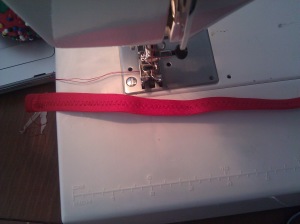 Turns out that lesson (plus the profanity) are still constants in my sewing efforts. I was attempting to pull the lycra tight around the elastic, but in the process of trying to wrap a stretchy slippery fabric around a substance whose entire point of being is to elasticate, I ended up pulling it and the zig zag stitch I was laying in didn’t fall properly – it ended up with this weird warped sort of thing happening, so the strap would not have lain flat once it was attached to the dress. Bummer.

Cut the lycra a little wider than double the width of the elastic, and fold one side over the elastic so that it’s flush with an edge, and then fold the other side over. Hold that bitch tight and run a quick line of stitches across the top of the elastic so that nothing moves. After that, sort of keep folding it over as you go down, folding one side in to stay close to the edge of the elastic and pulling the other side all the way across. Because it’s wider, the extra fabric will actually go past the elastic – this is totally fine, don’t stress out about that. After you’ve gone all the way down, set a similar line of stitches on the bottom of the elastic. Then trim off the extra fabric close to the zig-zag stitch – this is easy because you can just pull on the lycra and sort of run your scissors along and it comes right off and doesn’t fray.