An open letter to the workers at my Whole Foods

Dear Employees of the Awesome Whole Foods That I Go To:

This Thanksgiving, I am grateful to you, for being open on Thanksgiving Day from early morning to late afternoon. I feel terrible that you don’t have the whole day off, but I am so grateful that you’re there, because otherwise I would be bringing some very random food to Thanksgiving dinner. Like, it would literally be a tin of sardines and some mustard greens and a packet of pine nuts? Which are all perfectly fine on their own or in the correct context, but they don’t really have that down-home holiday feeling I remember from childhood. Come on, kids! Time to carve the Thanksgiving sardines!

Thank you for having random shit like quinoa flour and thank you for labeling the ever-loving crap out of everything so that even though I may spend two hours shopping for not very many things, I know exactly what I am getting.

I wish I didn’t pay you so much money, but, then, I wish it didn’t cost so goddamn much to eat the complicated shit I eat. That’s not really your issue, that’s just a general observation.

I look forward to seeing you on Thursday morning, and I will probably hug at least one of you, so don’t flip out. I just really love Thanksgiving and I am super happy that I am going to have the chance to cook, because this week…it is the shitshow. I have not had a day off in a really long time, and I appreciate that you are working on MY day off. It sucks, I know. You are the best.

Thank you, Whole Foods people – as someone who typically is at work while other people are having fun (because we often ARE other people’s fun), I appreciate it. I hope you are getting paid a whole messy pile of money. Lord knows I’ll be giving your corporate overlords enough of it in about thirty-six hours.

Against Line of Dance

So one of my new favorite things, which is thanks to a brilliant friend who knows all about everything, is the green smoothie. I was making these banana protein fruit jobs and they were pretty good, but let me tell you, friends…

It is the shit. No kidding.

So here’s what you’re gonna do if you want to be awesome and feel like it is sunshine inside your body all the time. You are gonna get a blender and you are gonna throw a bunch of fucking fruits and vegetables into that shit and make it into awesome. In fact I am going to make one of these bastards RIGHT NOW so you can see it happen in (sort of) real time.

(1) Buy a bunch of dark green leafy shit. You don’t have to know what it is. Just buy it. Also: ricemilk (or water, or regular milk, or really ANY KIND OF LIQUID…you could probably use vodka but that might defeat the point of this exercise a little bit), a banana, protein powder (totally optional, but I love this shit from Garden of Life – unflavored! the flavors are GROSS), and some frozen ass fruit. 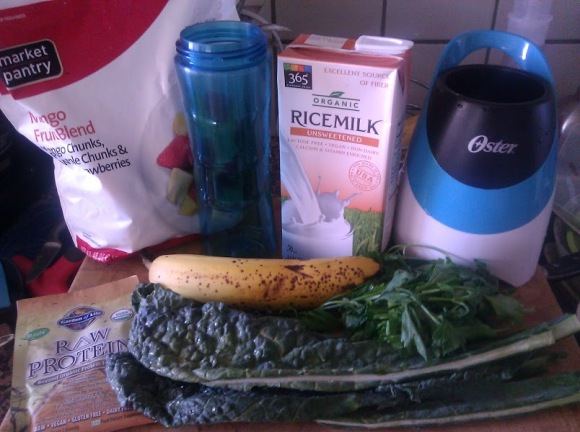 (2) Get that leafy shit and shove it in the bottle. Do you need to cut it up? Fuck no. That is too much goddamn work. We are gonna blend this shit. Just shove it in. Then dump in some liquid. More than you think. If you don’t have enough liquid, it won’t blend for crap. I usually mess this up and end up having to take the bottle off and whack it on the counter a couple times to get the stupid green shit to fall down and commit seppuku on the blade. But whatever. 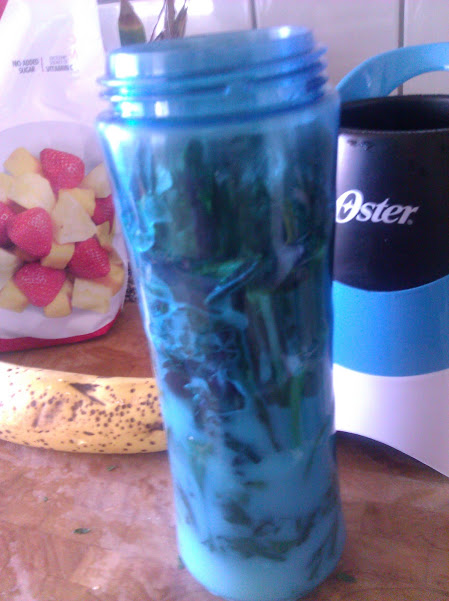 (3) Open that shit up and smell it. It smells like a fucking lawn that just got mowed. Why the hell are you going to drink that? Because it is fucking awesome, that’s why. Dump in your protein powder and break up a banana, then blend blend blend blend blend.

(4) Add more liquid because you fucked up the ratio the first time.

(5) Drink some of the smoothie because you want to add frozen fruit but there is not enough room in your fancy little bottle. Marvel at the ability of a banana to turn it from mowed-lawn-smell into fresh-amazing-deliciousness-smell. Bananas! They’re CRAZY.

(6) Dump in some frozen fruit and blend that shit again.

(7) It’s so fucking green! Wow! That’s cool. Drink that shit. Or throw it in the fridge. I have been making one of these bastards in the morning and taking it with me to the studio. Sometimes, if I know that I am not going to get to eat properly, I will throw in two packets of protein powder and call it lunch/dinner. Other times I will save my green fabulousness till the end of the night and drink it between wrapping up teaching and starting practice, and it totally helps me focus and feel good and not be a huge bitch at 11:30 at night.